The Perils Of Perfectionism To Career Advancement 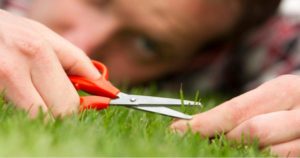 Is your perfectionism putting a damper on your career? Aiming for excellence is admirable for anyone seeking to reach their career goals. Be careful…If you’re striving to stand out among your peers and perform at your highest level, a perfectionist mindset can quickly set in. And while this mentality arises from a desire to succeed, it can actually prevent you from reaching your potential.

When I was a child, I had a grave affliction. It was a serious illness that used to drive family members crazy. Perfectionism. Have you heard of it? In subsequent years as an adult, my Aunt Blanch (of blessed memory) would never fail to recount and lament the pernicious nature of my childhood idiosyncrasies when talking to friends, girlfriends, and just about any poor sap who would listen. Whether it was how I had her tie and retie my shoes so that the shoelaces had loops that were evenly sized or how my bedroom window shades needed to be set at just the right height for me to go to sleep (halfway down for afternoon naps and all the way down for nighttime). It obviously caused her much grief; enough that she told and retold this story until her passing 30 years later.

I share this because throughout my career, I have worked with hundreds of technical professionals who are frustrated with their career progress, yet share the same affliction I once had (and oftentimes, still do).

Along the way, I learned that while getting something “just right” is gratifying, the universe rewards taking action, even if it’s an imperfect action. I’d like to share with you three lessons  I learned during my career and those individuals I’ve seen experience the greatest success in accelerating their career progress.

1. Recognize Your Team, Organization, & Customers Will Move On Without you.

Do you ever find yourself stuck in “analysis paralysis” because you’re afraid of making a mistake or making the wrong decision? Or maybe you’re in a team meeting and you wait to hear what everyone else has to say before you chime in; only to realize that they’ve already moved on to another agenda item by the time you’re ready? Savvy business professionals recognize that timing is of the essence.

There’s often a limited window in which you can seize upon opportunities that will disappear if you become mired in analysis paralysis.

I learned this lesson myself early in my career when working as an intern on a 6-month organizational change program. We took so long to design the “ideal” program that by the time we started marketing the program, the economy had taken a downturn and customer needs had shifted dramatically.

As an internal coach within large companies and nonprofits, the high potentials have a bias towards action and gather just enough information. Then, they move forward relying on their experience and the best available information they have at the time.

2. Adopt An Inventor’s Or Scientist’s Mindset

Many individuals are so afraid of making mistakes and being branded as failures (either by themselves or others) that they tend to tiptoe through their workdays and manage their careers with great caution. The highly successful employees constantly wear a hat of curiosity and discovery.  They often “fail forward.” They recognize that learning from mistakes and failures ultimately is the fastest path to success. Most of our jobs don’t involve situations where life and death are at stake; although many individuals stuck in their careers treat things that way. Didn’t Thomas Edison attempt 10,000 times before he successfully got the light bulb working? Each time he had the attitude that it was just one step closer to finding the correct solution.  Many startup software companies embraced this mindset by beta-testing the software and getting it into the market before it was bug-free and functioning as intended.

Earlier in my career, I used to meet with a group of coaches about once a month at a colleague’s house where we would discuss challenges we faced with clients and support each other in becoming better practitioners. During one of our get-togethers, one of the coaches, a former scientist, described how she was mixing chemicals in the lab and it literally blew up in her face. Her response? “Oops, that didn’t work!” Then she took note, adjusted a few things and tried again. That left an indelible impression upon me and from that point forward I was attracted to the notion of getting myself to a place where I could make light of mistakes, learn from them, and simply try something else rather than take things so seriously.

3. Request Support from Your Team

We all have our strengths. Even the brightest and most talented among us aren’t good at everything. Knowing your weak spots is in itself a strength. Career advancers are self-aware and know when to get help from others. You’ve heard the phrase “It takes a village.” They build a network of support. The same is true in the workplace or in running your own business as an entrepreneur.  Success is a team sport. While many of my clients have a strong sense of pride (and sometimes ego) in figuring things out on their own, it’s not necessary. Rather than suffer silently, being willing to be vulnerable and reach out to others to share your goals and enlist their ideas, encouragement, and know-how can truly help you get out of your own way.

People love to help other people. It’s okay not to have all the answers. When you open yourself up to others, you can enlist them in your vision. Two heads are better than one. And so are five heads. I had a boss, “Monty,” who was among the most respected leaders in the company and masterful at motivating his team. He was a man of many talents, yet one of his greatest strengths was that he never shied away from letting his staff know that he didn’t have all the answers and relied on their expertise to help him set direction and make decisions that would benefit him, the team, and the organization as a whole.

By recognizing opportunities as they occur, embracing mistakes as learning opportunities, and asking for help from others, you are virtually guaranteed to gain greater traction in your career. It may not be a nice clean trajectory, but you will make progress nonetheless.

Next Step To Advance Your Career