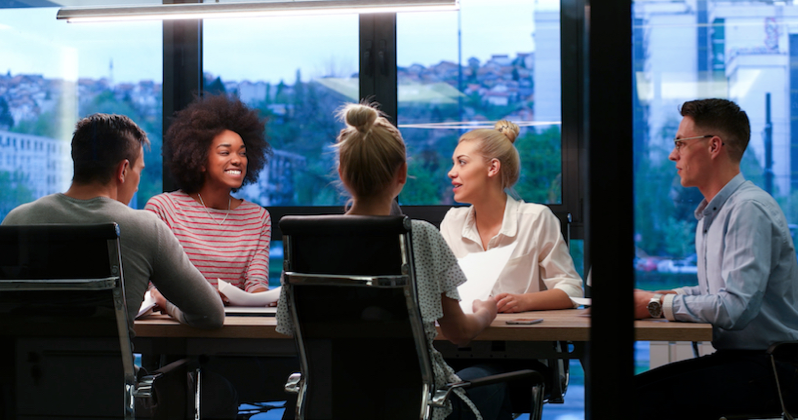 In part one of this article, Diagnosing Team Conflict, I shared challenges of a dysfunctional team for whom I was brought in to help. This included a two-step process of diagnosing and describing the overall impact. In order to determine the most effective solution to their conflict, I examined the team through five different lenses. This allowed me to holistically understand the root causes contributing to the cycle of conflict the team had been in for years.

In part two, I share the rest of the story as well as some fundamental steps you may take to resolve a sticky conflict within your own team.

Do you have difficulty in making solutions to team conflicts stick?

As leader, you are likely to be buried waist-deep in daily challenges that command a significant amount of your energy and attention. Under such pressure, many leaders end up ignoring and hoping a conflict goes away on its own, making a knee-jerk judgement, or relying on quick-fix solutions. These reactions become bad habits, only to have the same issues pop up again another day (hence the Groundhog Day sensation mentioned in part one of this article).

Understanding and addressing the underlying dynamics perpetuating your team’s conflicts are essential for successfully resolving them. Force-fitting a pre-determined or makeshift solution most often lacks staying power. However, deploying a more systemic approach that resists backsliding into old dysfunctional patterns can be transformative. In fact, when I touched base nearly 10 years after my client’s team conflict, the supervisor shared something remarkable:

“The results came to fruition and we were 100% satisfied with its success…We still model the basic elements of Mike’s resolution plan as our day-to-day practices interpersonal communication standard.”

What interventions helped this team turn things around? After completing a thorough assessment, we outlined and implemented a multi-part plan that helped build a foundation of trust and tilt the team’s interpersonal dynamics in a more positive direction. The recommendations fell into five key areas: Acknowledge reality, establish safety, improve feedback skills, redesign processes, and foster accountability.

A first step in remedying just about any problem is to admit and agree that there is a problem. Recognizing that not all conflict is bad is a key breakthrough for most teams. In fact, successfully working through differences of opinion will typically make the team stronger and imbue members with greater confidence to confront future challenges head on. After I was brought in to help the Claims team, I confidentially interviewed each team member to get a better understanding of what was going on. I also assessed their personal willingness to commit to helping change the team’s situation for the better. Subsequently, I shared my overall learnings with the entire team (while protecting the individual identities of who had said what) and led a conversation that resulted in a shared understanding of the team’s dynamics and the depths of the problem they were experiencing.

Step 2: Create a culture of safety

Without psychological safety, it’s unlikely a team will make much progress in dealing with the hard stuff head on. As I often share in my workshops on Crucial Conversations, and reinforced by Google’s internal research findings from Project Aristotle, psychological safety is an essential ingredient. Recognizing that not all conflict is bad is a key breakthrough for most teams. In fact, successfully working through differences will typically make the team stronger and imbue members with greater confidence to confront future challenges head on.

In the case of the Claims team, getting team members to acknowledge and publicly declare their commitment to creating a better work environment was a key first step. Safety was established for the Claims team by co-creating a desired vision of the future and brainstorming new team norms that support that vision.

1. Vision – A clear and compelling vision of the future can serve as a powerful catalyst for motivating change. I believe it was Abraham Lincoln who once said: “The best way to predict the future is to create it.” One of the first steps I took with the Claims team was to facilitate dialogue around the ideal work environment they preferred to have moving forward. There were plenty of skeptics in the beginning. Yet, providing a common focus diverted the team’s attention away from what’s wasn’t working to constructively thinking and working towards achieving their desired shared future. I once heard Deepak Chopra proclaim, “Where attention goes, energy flows.” This certainly was true for the Claims team.

2. Norms – Another tool we used involved the creation of new interpersonal and operational team norms – the behaviors, attitudes, and processes that groups adopt and signal to others what’s acceptable to fit in. With daily drama filled with finger-pointing and backbiting, individual team members had developed some bad habits that were hard to break. Even though none of them liked the constant conflict, they defaulted to the “devil they knew” by going on the offensive or defensive rather than risk making themselves vulnerable and sharing their personal truths. Newly established team norms dissolved what had become a negative, toxic team culture and laid the foundation for a more positive and healthier team culture.

One of my key findings was that Claims team members struggled with how to give and receive constructive feedback. This is not an unusual occurrence within teams. Fortunately, it’s a skill that can be learned and improved upon over time.

1. Conflict styles – In order to depersonalize some of the conflicts within the team, we held a conflict styles workshop which included a self-assessment for each team member. With newfound self-awareness of how each individual typically responded in stressful situations, the team was better able to understand the actions and reactions that each style preference evoked in others.

2. Focused dialogue sessions – Accompanied by the team vision and norms they had committed to upholding, the team also held focused dialogue sessions around taboo topics and constructively confronted the “elephants in the room” that had been creating a great deal of tension and distrust. As the team experienced more positive discussions over emotionally-charged issues, trust and confidence improved and meetings were eventually ably led by their Supervisor.

3. Coaching – Along the way, the leaders and team received both on-the-spot group coaching and as well as individual coaching to help bring awareness to blind spots and widen their view of themselves and others, brainstorm alternative strategies, and practice handling challenging situations while staying on track.

As mentioned in part one of this article, there are often structural or procedural aspects that can create natural tension and lead to conflict. This tension can be caused by inefficient and ineffective processes, unclear roles about who’s responsible for what, or when things are to be handed off from one person to the next and so on. One of the culprits facing the Claims team had to do with how their meetings were conducted.

1. Meeting effectiveness – Face-to-face team meetings had become scarce and notoriously unproductive when the Claims team did hold them. When the team’s supervisor was unable to attend the meetings, they usually devolved into shouting matches, misunderstandings, and hurt feelings. Therefore, we introduced some changes including identifying neutral locations to hold the meetings, restructuring the purpose of the meetings and their accompanying agendas, clarifying meeting roles, incorporating newly developed team norms, and agreeing upon ground rules such as “leaving badges/titles at the door” to reinforce equality.

2. Process improvement – The team identified broken business processes that were creating a lot of problems, including workflow distribution and the check-out and return process for the carpool vehicles. Then, they set out to tackle each process one-at-a-time.

Understanding common team undercurrents is a key for leaders to discern the dynamics at play within their teams. What’s often lacking are consistent consequences and rewards. Whether you realize it or not, it’s worth taking a moment to reflect on what impact you may be having.

1. Shared ownership – Everyone on a team, including the leader, has a part in any conflict that exists – either directly or indirectly. With the Claims team, there were members who hid, attacked, gossiped, stirred the pot, placated, and rationalized. These actions perpetuated their problems. For example, when a team member violated a policy or procedure, the Supervisor would broadcast a reminder to the whole team and hope the intended team member would recognize that the message was meant for them. After coaching the leader and helping him realize this approach was counterproductive, he began holding 1×1 conversations directly with the individual involved. This resulted in greater compliance and respect from other team members.

The strongest teams inspire shared leadership where peers are able to effectively hold each other accountable to agreed upon standards and goals. Furthermore, high performing teams recognize that agreed upon solutions or decisions won’t always pan out as anticipated. The Claims team subsequently established a check-in process with agreed upon timeframes to review progress and to make any needed pivots for getting back on track. That’s why follow up and check-ins for accountability are so important.

2. Celebrate progress – Rather than purely focusing on outcomes, recognizing incremental progress reinforces the desired behavior and overall direction. The Claims team began recognizing what they were doing right through informal peer acknowledgement and encouragement as well as more active reinforcement by the direct supervisor and manager of desired behaviors. These actions helped to reverse the negative downward spiral and generate positive upward momentum.

Oh, are you still wondering about the solution for the carpool vehicles? Once the team had begun working on treating each other with greater respect and had rebuilt a solid base of trust, they scheduled a meeting to set out to solve the problem…on their own. The team member who had previously been appointed by the Supervisor to oversee the vehicle lending program readily agreed to step down and was actually quite relieved about not needing to be in the “Car Czar” role any longer. The team also established a simple set of procedures to govern themselves and to ensure the carpool vehicles were appropriately maintained and available whenever they needed to use them. Finally, they agreed to let go of past grievances while agreeing to give each other the benefit of the doubt moving forward if/when things went askew.

What is the next step you will take to resolve your team conflict?

Need help to assess and resolve a team conflict? My team and I would love to partner with you. Learn more about leadership and team coaching support for you and your organization (be sure to ask about the Five Behaviors of a Cohesive Team method as well). Book a complimentary Strategy Session for us to discuss your situation and explore your options.

About the Author
Mike Gellman is a seasoned coach, speaker, facilitator, and trusted advisor with 15+ years experience in Fortune 500, nonprofit, and family-owned organizations. He’s the author of Pipe Dreams: 7 Pipelines of Career Success and CEO of High Five Career Coaching which facilitates transformational business and career success among socially conscious, purpose-driven organizations, leaders, and technical professionals.