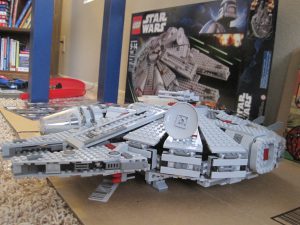 “Darn it!” I lamented as my son and I discovered that an important Lego piece was missing. My son and I were nearing completion of the Millennium Falcon spaceship from the epic Star Wars series. We combed through the family room carpeting hoping to find the wayward piece. It was nowhere to be found. I soon became transfixed on finding a replacement piece so that we could complete the spaceship.

Without missing a beat, my son began pretending that the venerable Millennium Falcon got hit during battle, yet was still intact. The missing piece served as a source of inspiration for some epic play-acting time together and was an imaginative solution to our problem.

My son’s creativity transformed our temporary frustration into a fun and more realistic experience. He pivoted. After all, the actual Millennium Falcon in the Star Wars films suffered lots of dings and damage from numerous Imperial attacks and still was able to use its hyperdrive capability to avoid destruction. I thought it was a brilliant maneuver on my son’s part.

What my son did was reframe the situation by changing the context that infused a new interpretation of the situation and subsequently our reaction to the challenge. No longer did the Millennium Falcon need to be “perfect” as originally designed.

It struck me that we’d be better off managing our careers in such a fashion. Just as Lego creations sometimes don’t always end up exactly like the picture on the box or how we originally envisioned, our careers often don’t play out as originally promised or planned. Naturally, this can be frustrating. We can choose to look at something as “lacking” or “broken” or we can improvise and engineer a clever solution to the challenge using a new frame of mind.

Ultimately, we’re all in charge of our own work experience. This includes accepting and making the most of any situation we may face. The Millennium Falcon experience also provides a stark reminder that we’d be well to maintain a degree of detachment from any pre-determined outcome. By remaining open and flexible, we can more easily identify and take advantage of other opportunities that arise. Rather than become derailed, magic happens when we ease up and play with the quirks life’s challenges throw at us.

Where can you make a pivot and re-frame a challenge you’re facing?